This story speaks on spirituality, or if you will, belief in a higher power.

Do miracles really happen? This is a question that I feel floats around as people ponder their beliefs. Well, allow me to tell about one of my miracles.

About 15 years ago, at church, I survived something very profound. Our church as a sanctuary on one end of the building, on the other and we have a chapel and a parlor. Dividing the two is a hallway about 100 feet long. At that time, during our services, there was a Korean group who would use our chapel and after their service they would make a lunch in the parlors kitchen.

During our service, I needed to get up and stretch my legs. As I came into the narthex the usher asked if I smelled gas. Before he could finish his sentence, I was bolting down the hall, because I could easily small gas coming from the kitchen 100 feet on the other end of the building.

- The image below shows the door far down the hall from where I took off from. 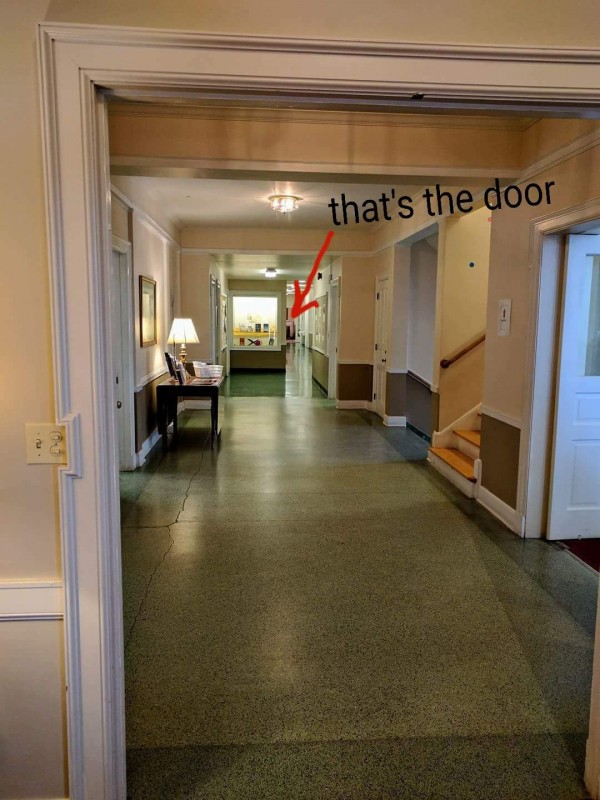 As I entered the room a lady was at the stove with a match in her hand just getting ready to strike it. I screamed to stop! She dropped the unlit match to the floor which had been less than a second away from being lit. The group did not know what the smell was. They had not encountered it before. I open all the windows wide to let the room air out. From there I didn't make much of the situation and just moved forward as if nothing happened.

This was another memory which had been locked away due to the recurring traumas. In the fall of 2016, a group from my church had been serving a meal at an elderly community center. As we were getting ready to leave, a person went to one of the regular staff saying that they thought they smelled gas. They were concerned that the gas stove was fully turned off. That very short interaction, those few words, triggered the memory of the above event. For the first time in all the years following the above event I was able to recall what happened. As we were waiting to leave I told the story to one of the other church members. The reaction on her face was naturally one of horror at how close it had come to losing my life that day. The only response I could give was "yes that would've been a big boom".

Over the next few months I allowed myself to fully recall the memory. I did not push the memory to come to me, but open myself up to what I needed to process from that event. It took a couple months before am really began to consider the difference one second could've made. If I had entered the room just one second slower, I would have run right into the explosion. If I had been 2 seconds slower, I may have made it to the door has the explosion occurred. Either way I would not be here today to tell the story.

My pondering, of the difference a second or two could have made, seem to naturally be a part of my processing of that memory. It has served to help me and realize just how quickly events can happen in our lives.

Yours in hope,
Jory Pradjinski

What the mind can conceive and believe it can achieve. - Napoleon Hill