What is Hyperbaric Oxygen Therapy (HBOT)? 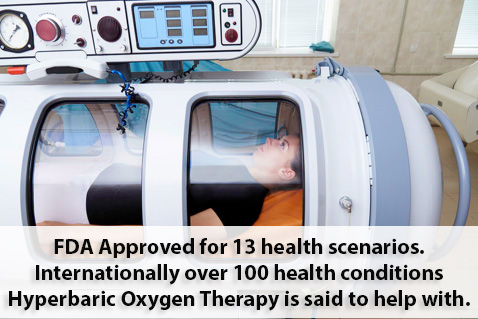 The chamber is pressurized; atmospheric pressure is three times higher allowing the body to intake three times the normal percentage of oxygen. It can be beneficial for a wide range of health conditions. It is FDA approved for about 13 different health scenarios, but it has benefits for so many other non-approved conditions.

For many years, its primary purpose was to help divers who surface too quickly and are at risk for decompression illness. Now there are over 1,200 HBOT centers in the U.S., and there are maybe two specifically focused on improving diving injuries.

Hyperbaric Oxygen Therapy can help in enhancing the body’s natural healing processes. Many injuries and illnesses involve the lack of oxygen-rich blood, which is then unable to travel to affected areas of the body (Christiansen, 2020). The body needs sufficient oxygen in order to heal itself, and by breathing 100 percent oxygen there is more delivered to the body’s organs and tissues.

What Health Conditions Does Hyperbaric Oxygen Therapy Help with?

Hyperbaric Oxygen Therapy is FDA approved for about 13 different health scenarios, but it has benefits for many other health conditions. Internationally there are over 100 health conditions hyperbaric oxygen therapy is said to help with.

Other Uses, Not FDA Approved

Hyperbaric Oxygen Therapy is beneficial because many illnesses and injuries cause a lack of oxygen to be present in the body, and the body needs sufficient oxygen to heal. 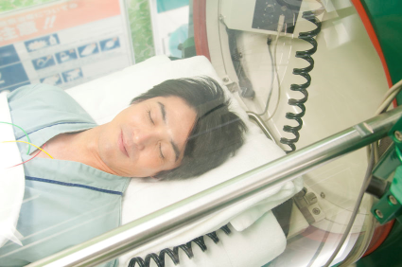 HBOT provides a person’s body with 100% oxygen. Most healthy individuals have somewhere between 96% and 98% oxygen in their hemoglobin, which means your capacity to increase your oxygen level is between 2% and 4%, were you to breathe medical-grade oxygen (Dr. Mercola, 2019). Just to carry on normal functions it is necessary to receive 100% oxygen. Excess oxygen becomes even more important when dealing with a complicated health issue.

Overall, HBOT is considered to be a safe, natural form of therapy. Side effects, if any, are usually mild and very temporary.

It is recommended to check with a healthcare professional before using Hyperbaric Oxygen Therapy. HBOT should never be utilized in life-threatening health scenarios. It is also recommended to visit an FDA approved facility with properly trained staff. This is extremely important because chambers not medically approved may not have the proper purity of oxygen. Some providers use soft chambers and with a power outage that could cause suffocation. There is also a risk of explosion or fire when using pure oxygen. Therapists should take the necessary safety precautions to prevent a fire by not allowing powered devices, lighters, or people wearing flammable skincare or hair care products inside the chamber.

Overall, HBOT is considered to be a safe, natural form of therapy. Side effects, if any, are usually mild and very temporary. However, if HBOT is not used properly, it can result in many harmful scenarios. Health problems which are rare, but can occur include ear, nose, sinus, vision, teeth, and joint problems. Other reported uncommon side effects include anxiety, claustrophobia, decompression sickness, increases in blood pressure, low blood sugar, paralysis, seizures, excess fluid in lungs, and a collapsed lung. In rare cases, too much oxygen in the body’s tissues can also cause oxygen toxicity or poisoning. Some proper safety measures to prevent severe side effects include limiting HBOT sessions to two hours, and pressure should always be kept at less than three times the pressure of the atmosphere.

When HBOT should NOT be used:

How Does Hyperbaric Oxygen Therapy Work?

The chamber is pressurized; atmospheric pressure is three times higher allowing the body to intake three times the normal percentage of oxygen.

Due to most healthy individuals having 96-98% oxygen in their blood, breathing medical-grade oxygen can increase their level by 2-4% (Dr. Mercola, 2019). 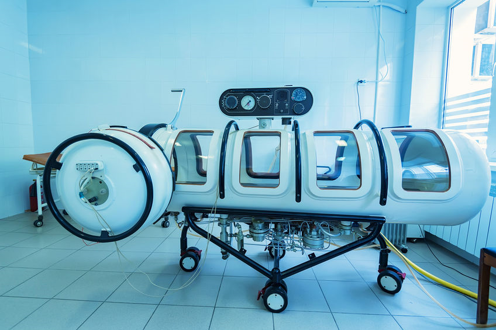 Hyperbaric Oxygen Therapy helps enhance the body’s natural healing processes. Many injuries and illnesses involve the lack of oxygen-rich blood, which is then unable to travel to affected areas of the body (Christiansen, 2020). We typically only breathe 21% oxygen on a regular basis. HBOT provides more oxygen for the lungs, and therefore more circulates in the blood to all tissues and organs. This can repair damaged blood vessels, and lead to collagen growth which will help with healing. HBOT allows for oxygen to be dissolved in the blood, body fluids, cerebral spinal fluid (the fluid that surrounds the brain and spinal column), bone tissue, and lymph nodes (Christiansen, 2020). For injuries, this may speed up the healing process by three to five times.

British physician, Nathaniel Henshaw provided the first documented use of hyperbaric therapy in 1662.

How Hyperbaric Oxygen Therapy Was Created

British physician, Nathaniel Henshaw provided the first documented use of hyperbaric therapy in 1662. He created a domicilium, which is an airtight chamber where valves and bellows control the oxygen that can be compressed and decompressed. The benefits were likely not present at the time, but this innovation was huge since oxygen wasn’t even discovered yet. Boyle’s law stating how pressure and volume of gas have an inverse relationship when temperature is constant, also contributed to the formation of HBOT.

Hyperbaric chambers became popular across Europe throughout the 1880’s for various health conditions. However, there was still a lack of scientific understanding. The foundations of hyperbaric medicine were laid in 1872 by Paul Bert, a French engineer, physician and scientist, who wrote about the physiological effects of air under increased and decreased atmospheric pressures in La Pression Barometrique (Carden, 2019). 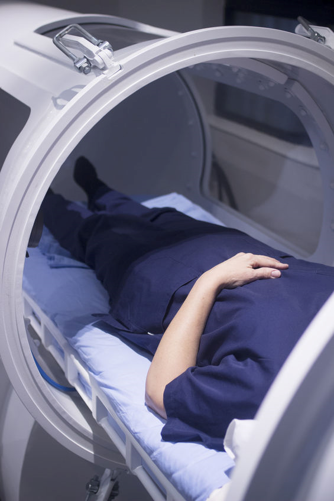 The first hyperbaric chamber in the United States was built around 1860 - 1890 in New York by neurologist Dr. J. Leonard Corning. He created it during the time of the influenza epidemic to treat diseases including arthritis, diabetes, and syphilis. In 1930, a Brazilian physician, Alvaro Osorio de Almeida, published many papers on the effects of taking in more oxygen to treat tumors in animals and people. Around the same time, the Navy also researched hyperbaric oxygen in order to help with decompression sickness. In 1960, Williem Brummelkamp discovered the therapy helpful for anaerobic infections.

HBOT eventually became used for various medical conditions including carbon monoxide poisoning, wound healing, trauma, and infections. These discoveries and others led to HBOT being used in some of the most prestigious medical centers in the United States.

Present Use of Hyperbaric Oxygen Therapy

Advanced imaging technologies have only helped to improve the research and interest in HBOT. As hyperbaric research continues, scientists are finding that neurological conditions, stroke and brain injuries, all previously considered to have a poor prognosis, respond well to HBOT (Oxford Recovery Center). Successful treatment with hyperbaric for conditions as diverse as autism, fibromyalgia, multiple sclerosis, side-effects of chemotherapy and radiation toxicity in cancer patients have growing numbers of researchers, physicians, patients and their families believing in the power and efficacy of HBOT (Oxford Recovery Center).

Many hospitals and health clinics do provide this therapy, but will only treat the 13 or 14 FDA approved health conditions.

Insurance companies and Medicare will often cover the costs if you are being treated with a HBOT that is FDA approved. To find a place that treats even more health problems, it is necessary to look at the private sector and search for “hyperbaric oxygen centers.” Contacting the International Hyperbaric Association (IHA) or Hyperbaric Medical International (HMI) could also be helpful in finding a HBOT center. These are the two organizations focused on educating the public on the use of HBOT in the U.S., especially for conditions that aren't FDA-approved (Dr. Mercola, 2019).

The number of sessions will depend largely on a person's health condition. Sessions can be anywhere from 30 minutes to two hours. 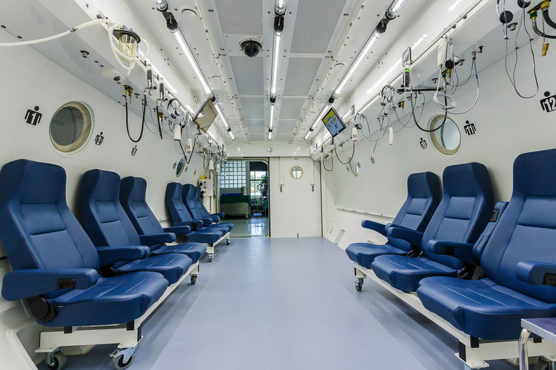 It is usually recommended a person shower before treatment and not use perfume, deodorant, hair spray, and other styling products. Additionally, at least 4 hours before Hyperbaric Oxygen Therapy carbonated beverages and alcohol should be avoided. It might also be required to wear a medical gown that is 100% cotton, due to the fact that many types of fabric are not allowed in the chamber for safety reasons.

Chambers are typically just big enough for one person, but there are some chambers that are made to fit up to a dozen people (multiplace chambers). The solo chamber (monoplace) may just be a table you lay on that goes into a plastic tube about 7 feet long.

There are also different types of chambers. Hard shell chambers used in hospitals provide the highest pressures at 100%. Then, there are hard chambers where air is used to create pressure and oxygen is added separately. This chamber has less restrictions on clothing and what electronic devices can be used. The last type of chamber is the soft chamber where the amount of pressure is really limited.

What Happens During a HBOT Session?

The chamber will be sealed and filled with pressurized oxygen, and you are told to just breathe normally. Some places will provide music or TV to watch to help with relaxation during the session. A patient can also read or sleep during the session. A person might also get questions from the therapist outside the chamber. It might feel a bit stranger or cause ears to pop, but discomfort is usually mild. Yawning and swallowing can be help minimize the pressure on the ears. When the therapy session is over the chamber will slowly be depressurized. Most common side effects are feeling a bit tired or lightheaded temporarily afterward.

It's always too early to quit. - Norman Vincent Peale