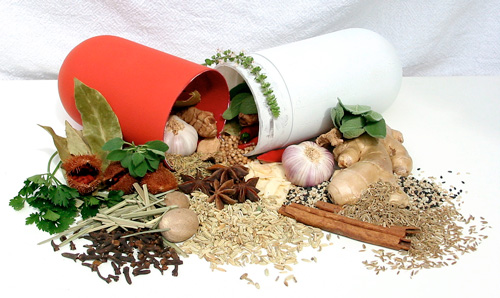 Herbs are any plants used for food, flavoring, medicine, or perfume. Culinary use typically distinguishes herbs from spices. Herbs refer to the leafy green parts of a plant (either fresh or dried) while spices come from another part of the plant (usually dried), including seeds, berries, bark, roots and fruits.

Herbs have a variety of uses including culinary, medicinal, and in some cases spiritual usage. General usage of the term "herb" differs between culinary herbs and medicinal herbs. In medicinal or spiritual use any of the parts of the plant might be considered "herbs", including leaves, roots, flowers, seeds, resin, root bark, inner bark (and cambium), berries and sometimes the pericarp or other portions of the plant.

Herbs have long been used as the basis of traditional Chinese herbal medicine, with usage dating as far back as the first century and far before. In India, the Ayurveda medicinal system is based on herbs. Medicinal use of herbs in Western cultures has its roots in the Hippocratic (Greek) elemental healing system, based on a quaternary elemental healing metaphor.

It's always too early to quit. - Norman Vincent Peale